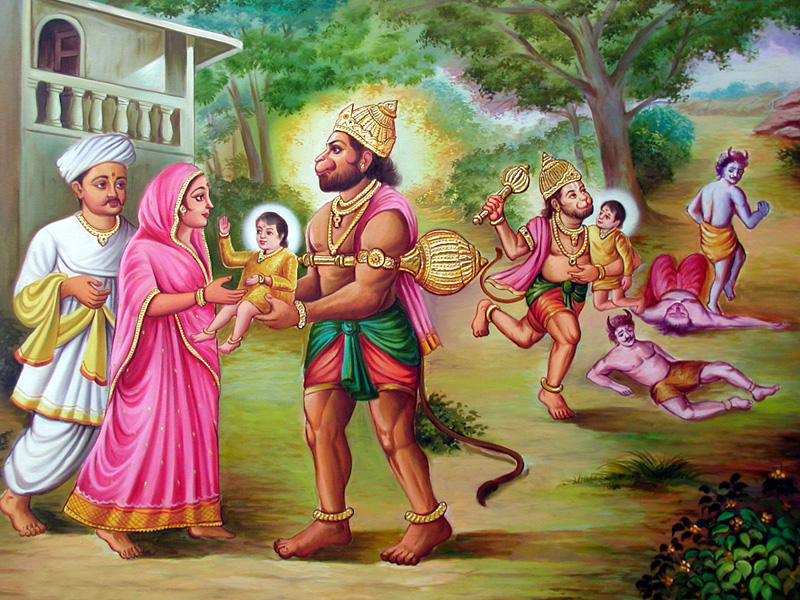 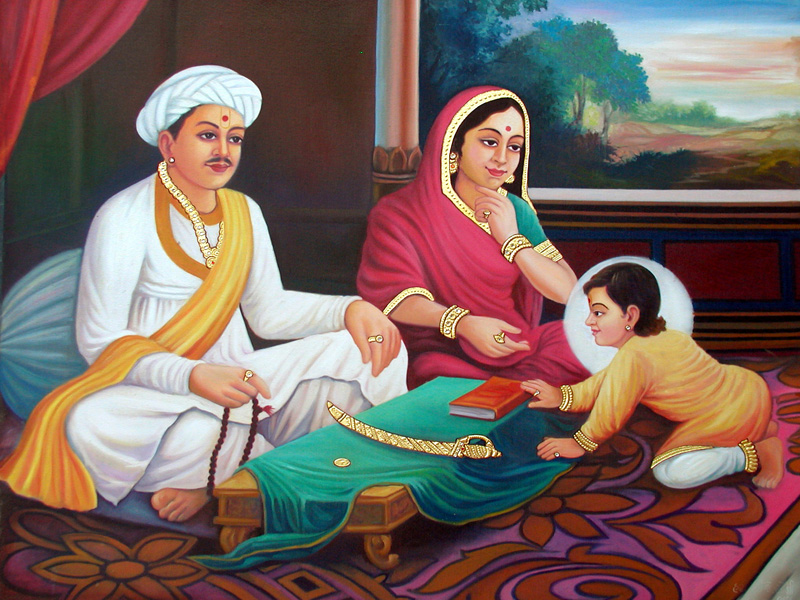 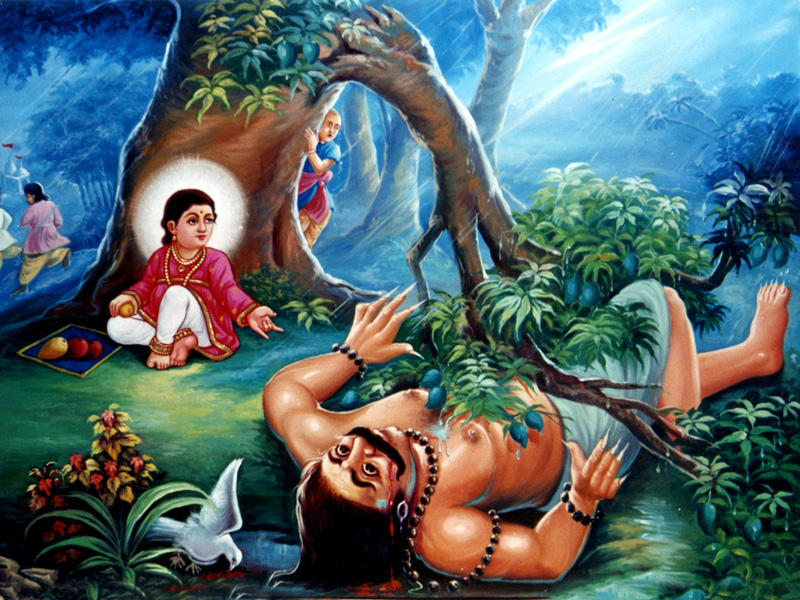 Ghanshyam's Mami Laxmibai was preparing 'seero' for Bhaktimata. Ghanshyam sensed that his mother was feeling very hungry because of the long time it was taking to prepare the food. He therefore called upon the sidhis, ladies from heaven, to prepare the food. The sidhis prepared the food quickly and offered it to Bhaktimata. Laxmimami was astonished to see this miracle and felt that Ghanshyam was no ordinary child.

On Saturday, the sixth day of Ghanshyam's birth, Dharmdev, Bhaktimata and other family gathered for a religious ceremony, i.e.Chhatti which ran on late into the night. At midnight, demonesses, otherwise known as Krityas, entered Dharmdev's and Bhaktimata's house in an attempt to kill Ghanshyam. On seeing the Krityas at their home, they became very frightened and were unable to prevent the evil kritya's taking Ghanshyam away. The Krityas snatched Ghanshyam and headed for the mountains. Feeling helpless and distressed, Dharmdev and Bhaktimata prayed to their Kuldev, Hanumanji, to help recapture Ghanshyam and return him safely. Their prayers reached Hanumanji who immediately arrived at their home. They informed Hanumanji of the event that had occurred and he then left for the mountains in search of Ghanshyam. Hanunianji beat them with his powerful tail and mace. Brutally beaten, the Krityas left Ghanshyam and ran for their leader Kalidatta's protection who was enraged at the Krityas failure to kill Ghanshyam. Meanwhile, Hanumanji brought Ghanshyam back to Bhaktimata and Dharmdev who were overjoyed to see their son returned safely. They gave thanks and gifts to Hanumanji. Today, we too offer gifts to please Hanumanji (in the form of coconuts and oil) on Saturdays.

Two and a Half Months Old - Ghanshyam Shows His Powers

Ghanshyam was playing in the Paraniya (cradle). Looking around, Ghanshyam saw a colourful toy on the floor. At this age no ordinary child would be able to walk or crawl, but Ghanshyam climbed out of the paraniya, picked up the toy, climbed back into the paraniya and then continued playing as normal. Having seen this event, Dharmdev and his friend Ramdayal were astonished. They looked towards Ghanshyam and saw a warm glow of light surrounding his face. Again Ghanshyam showed His divine powers.

Whilst on a pilgrimage, and other Rushi's came to Dharmadev and Bhaktimata's house where they were warmly greeted. Dharmadev asked Markandeya Muni to name Ghanshyam. Ghanshyam was a pet name that the family called him. (NB. If a child is not named on the eleventh day then the child must be named on the hundredth day.) Markandeya Muni was delighted to be asked and replied, ""your son is born in Karkraashi therefore he will be named Hari, he has such beautiful features so he will also be called Krishna. If you join those two names together he will be called Harikrishna."" Bhaktimata and Dharmadev were so delighted by the names that were given by Markandeya Muni, so Bhaktimata asked Markandeya Muni about Ghanshyam's future, by hearing this Markandeya Muni's thoughts were dragged towards Ghanshyam and Markandeya Muni started hearing 'Swaminarayan Swaminarayan' in his mind. From that moment Markandeya Muni knew straight away that this is God himself. Markandeya Muni replied to Bhaktimata ""your son has qualities such as Tap, Tyaag, Rog, Dharma, and Nitti so he will be known as Nilkanth and many other names. He is the redeemer of all sins on earth; he will destroy sadness in those minds and will make them happy by praising Bhagwan."" Everyone was overjoyed by this occasion; however tears fell from the eyes of Markandeya Muni. Dharmadev asked ""Why do these tears fall from your eyes?"" Markandeya Muni replied, ""I am thinking how misfortunate I am, as I will be unable to witness the great miracles of your special child son due to my old age."" After the ceremony the Rushi's and Brahmins were given food and clothes as an offering. It must be noted that Markandeya Muni took rebirth as Swami Mahabhuvanandji and was able to have darshan of Ghanshyam.

Five and a Half Months Old

On Pootrada Ekadashi, Ghanshyam's parents began to teach him to sit and walk. After Ghanshyam was able to sit and walk Dharmadev wanted to determine his son's interests. He placed Gold coin, book and also a small sword on a silk cloth in front of Ghanshyam. Some children would be attracted to money as it is shiny, others may pick up a sword, but being no ordinary child, Ghanshyam chose the book. This indicated his willingness to gain knowledge. Seven Months Old - Ear Piercing Ceremony or Karanvedh Sanskar

The storm now ceased, and Ghanshyam Maharaj and His friends returned home.

Ghanshyam Maharaj had a number of friends including: