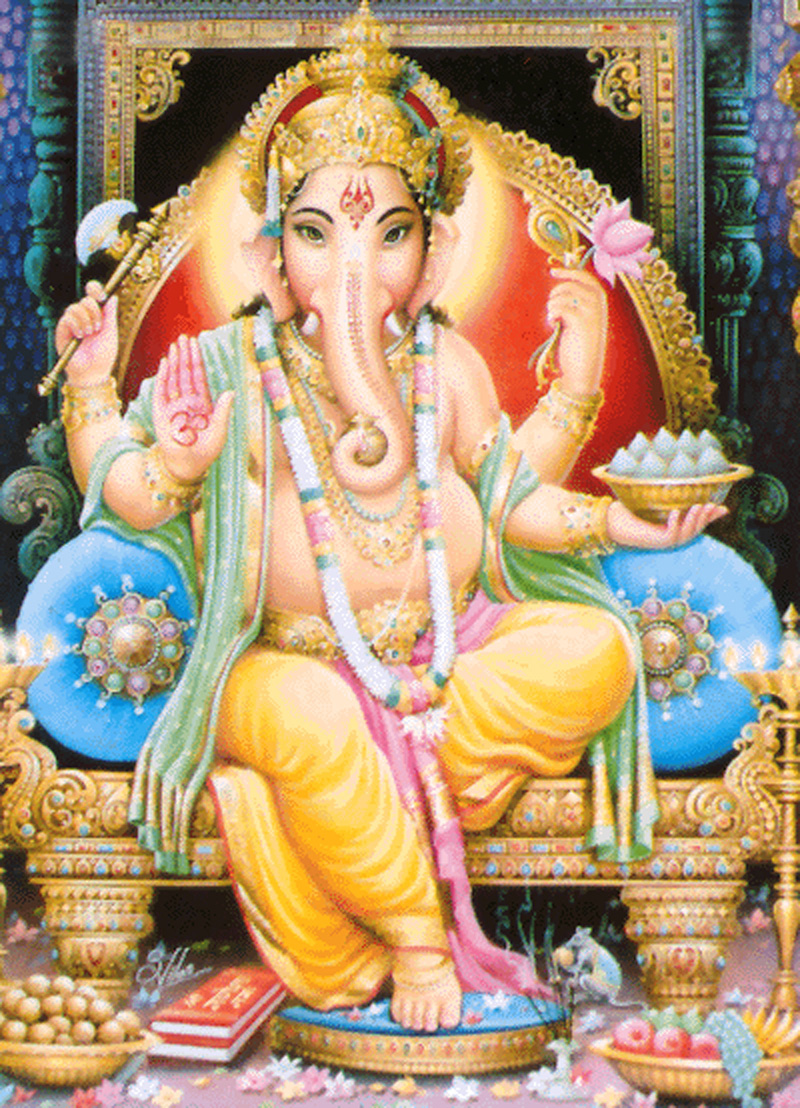 Ganesh Chaturthi is one of the most popular of Hindu festivals. This is the birthday of Lord Ganesha. It is the day most sacred to Lord Ganesha. It falls on the 4th day of the bright fortnight of Bhadrapada (August-September). It is observed throughout India, as well as by devoted Hindus in all parts of the world Lord Ganesha is the elephant-headed God. He is worshipped first in any prayers. His names are repeated first before any auspicious work is begun, before any kind of worship is begun.

He is the Lord of power and wisdom. He is the energy of Lord Shiva and so He is called the son of Shankar and Parvati. By worshipping Lord Ganesha mothers hope to earn for their sons the sterling virtues of Ganesha.

Once upon a time, the Goddess Gauri (consort of Lord Shiva), while bathing, created Ganesha as a pure white being out of the mud of Her Body and placed Him at the entrance of the house. She told Him not to allow anyone to enter while she went inside for a bath. Lord Shiva Himself was returning home quite thirsty and was stopped by Ganesha at the gate. Shiva became angry and cut off Ganesha's head as He thought Ganesha was an outsider.

When Gauri came to know of this she was sorely grieved. To console her grief, Shiva ordered His servants to cut off and bring to Him the head of any creature that might be sleeping with its head facing north. The servants went on their mission and found only an elephant in that position. The sacrifice was thus made and the elephant's head was brought before Shiva. The Lord then joined the elephant's head onto the body of Ganesha.

Lord Shiva made His son worthy of worship at the beginning of all undertakings, marriages, expeditions, studies, etc. He ordained that the annual worship of Ganesha should take place on the 4th day of the bright half of Bhadrapada.

Without the Grace of Sri Ganesha and His help nothing whatsoever can be achieved. No action can be undertaken without His support, Grace or blessing.

On the Ganesh Chaturthi day, meditate on the stories connected with Lord Ganesha early in the morning, during the too. You can get the assistance of a pundit. Have an image of Lord Ganesha in your Brahmamuhurta period. Then, after taking a bath, go to the temple and do the prayers of Lord Ganesha. Offer Him some coconut and sweet pudding. Pray with faith and devotion that He may remove all the obstacles that you experience on the spiritual path.