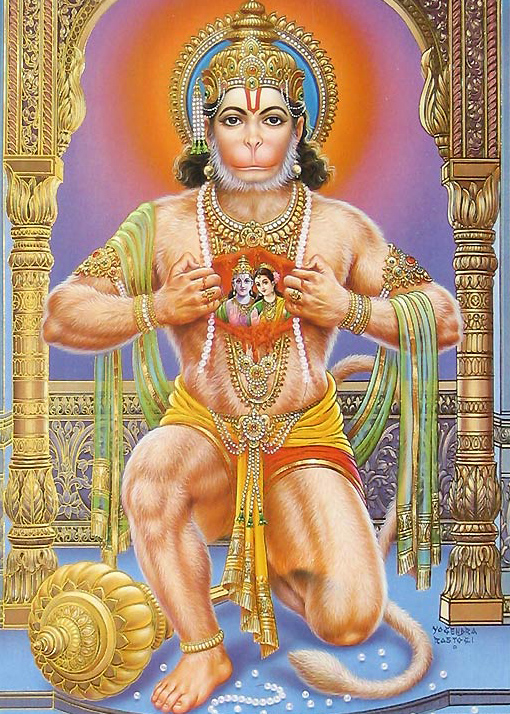 Hanumanji was born to Anjani, the wife of Kesari Vanar the king of the monkeys. The birth of Hanumaji happened as result of a number of divine events. Longing for a son Anjani performed penance to please Lord Shiva. Lord Shiva was pleased with Anjani's penance and gave her his Darshan and blessings. He then asked Anjani to pray to Vayu Dev, the God of wind. Vayu Dev was pleased and granted Anjani a Son.

It is quoted in Shikshapatri (slokh 85) that in the event of distress from evil spirits one should narrate the mantra of Hanuman Strotra. Hanumanji has served Lord Rama, Lord Krishna and also Lord Swaminarayan throughout their time on earth.

Hanumanji was very strong and had an adventurous instinct. On one occasion when he was a baby he became very hungry. As he lay in his cot, he saw the sun in the sky and thought it was a fruit and wanted to pick and eat it. He flew into the sky and put the sun in his mouth. Lord Indra requested that Hanumanji return the sun and finally unleashed his weapon called Vajra and knocked Hanumanji down to earth releasing the Sun. Indra and various other Devas granted Hanumanji several boons namely Strength, immortality, wisdom and ability to travel great distance easily.

He helped Lord Rama in search for Sita and helped defeat evil Ravana.

When Laxman was rendered unconscious by Ravana's Son Indrajit, Hanumanji was sent to fetch special herbs that would revive Laxman. The special herbs grew on Mount Dronachal. He could not identify these herbs from the others so he picked up the whole mountain and brought it to Lord Rama.

On Lord Rama's coronation Sita gave Hanumanji her Pearl necklace. Hanumanji took the necklace and began to break the pearls with his teeth. Not seeing His Master Lord Rama in the pearls he disregarded the necklace and said:- "He desires nothing that does not consist Lord Rama." The members of the assembly then questioned whether he was really a true devotee of Lord Rama. On hearing this Hanumanji tore open his chest to reveal the image of Lord Rama and Sita in his Heart.

On Ghanshyam's Chhatti evil Kalidatta sent his Krityas (female companions) to kill Ghanshyam, when the Krityas kidnapped Ghanshyam, distraught Baktimata cried for help. Hanumanji appeared before her and said that he will return with her Son. He captured the Krityas and beat them with his mighty tail and returned Ghanshyam to Baktimata.

During Nilkantvarni's vanvicharan, Nilkantvarni became tired and fell asleep in the forest. Hanumanji was coming to have darshan of Nilkantvarni. In the forest Asuras were roaming and searching for food. They saw that Nilkantvarni was a defenceless child and would be an easy meal. But as they approached Nilkantvarni, Hanumanji saw them and fought off the Asuras. He sat down beside Nilkantvarni in order to protect him whilst he slept. On awakening Nilkantvarni saw Hanumanji and granted him a boon. Hanumanji requested that he would like to remain at his service for ever.

Hanumanji's qualities make him the ideal Bhakta, who devoted his life in the service of God. We would all pray to Hanumanji to make us devotees like him.

On this day poojan of Hanumanji is performed with oil and ankada flowers followed by the Aarti and thad. Prashad of Geishyo, which can only be made by the male members, is served and Hanuman Chalisa is recited.