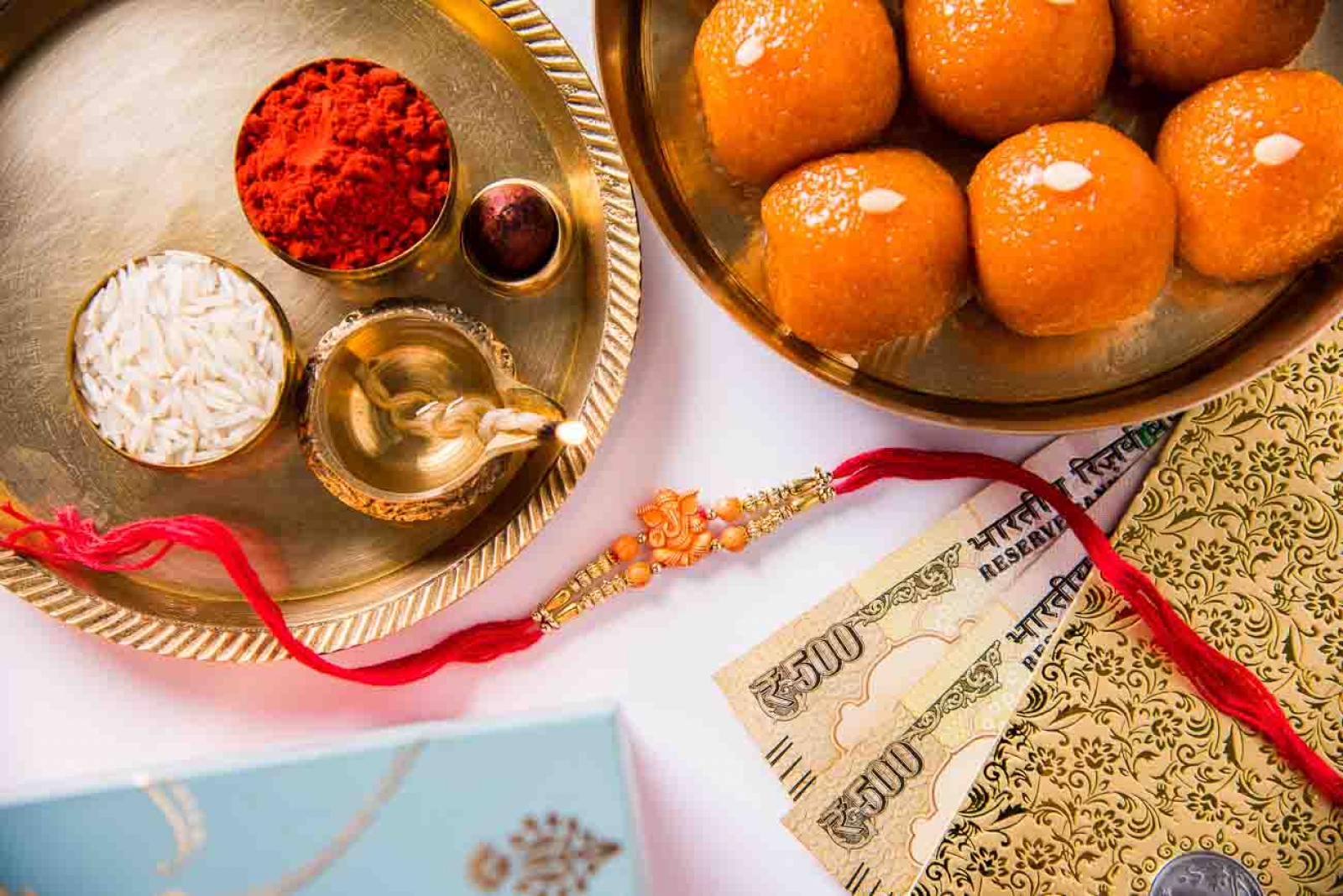 Raksha Bandhan celebration, started tens of thousands of years ago . Bhavishya Puran cites a story that the devas once battled with the danavas (demons) for twelve years. However, the devas lost, including the mighty Indra. So they prepared to fight again. On this occasion, Indrani tied a raksha (protection ) on her consort Indra, after extolling Raksha Bandhan's glory. Indra then attained victory.

This celebration was first celebrated by the wife tying the Raksha Sutra on the husband for his protection. It was first tied by Indrani to Lord Indra. In ancient times a woman tied a 'raksha' on her husband's wrist to protect him from evil. Gradually this changed; she tied a 'raksha' on her brother's right wrist, to protect him from evil influence. She visits her home and performs his 'pujan' by applying kumkum and rice grains on his forehead. In return the brother gives her a gift and vows to protect her too. Today the 'rakhadi' itself ranges from a coloured cotton, diamonds, gold, string to exquisitely decorated balls of various sizes and materials. During the battle of Mahabharat, Queen Kunti tied a raksha on her grandson Abhimanyu to protect him in battle.

When the demon King Bali's devotion won over Lord Narayan, he was compelled to leave his abode, Vaikunth, to stay in Bali's kingdom in Sutal loka . When Lord Narayan failed to return, his distressed consort Lakshmi arrived in Sutal on Shravan Purnima. She accepted Bali as her brother by tying a raksha (a sacred cord tied around the wrist of the right hand ) which protectes from disease and evil. In return, Bali asked her to wish for a boon. She requested Narayan's return. She grieved that despite having a consort she was experiencing premature widowhood in Narayan's absence. However, the Lord had pledged to eternally protect Bali, by guarding his door. To resolve his dilemma, Brahma and Shiva agreed to guard Bali for four months each, while Vishnu (Narayan) would guard him for the auspicious four months - Chaturmaas - beginning from Ashadh Sud Ekadashi and terminating on Kartik Sud Ekadashi, usually from Mid- July to Mid-November. The festival of Raksha Bandhan commenced when Lakshmiji tied the 'rakhadi' on Bali Raja. Since Bali Raja offered devotion by sacrificing everything to the Lord, the day is also known as 'Bali-eva' or 'Baleva' for short.