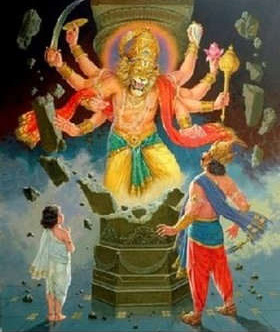 Vaisakh Sud Chaudaus marks the birth of Nrusinh Bhagwan. On this day, Nrusinh Bhagwan was very pleased Prahladji and said anyone who does the Nrusinh Chaudaus Vrat will destroy all his/her sins. He also said that those women who want to bear a male shall do this Vrat and a bright son will be born in their family. Shikshapatri Bhasya Shlok 82, Bhagwan emphasised everyone to do this Vrat every year.

When the Varaha avatar incarnated, vanquishing the demon Hiranyaksh, his infuriated brother Hiranyakashipu vowed revenge. Scaling Mandrachal mountain, he performed harsh penances. This pleased Brahma. Therefore Hiranyakashipu requested a boon, "O Supreme Almighty! Let my death not occur by the hands of man, animal, deva or demon. Let me never die, neither indoors nor outdoors, neither during the day nor night, neither by weapons nor mantra, neither on earth nor sky. Let me become the eternal emperor supreme of the whole earth...."Brahma granted the boon. Hiranyakashipu then embarked on a reign of terror in Trilok - the three worlds.

When he was engrossed in penances, the child in his wife Kayadhu's womb frightened Indra. Therefore he kidnapped her. While fleeing he encountered Naradji, who persuaded him to release Kayadhu. Taking her to his ashram, Naradji instructed her to worship Vishnu. He recited to her texts glorifying Vishnu's divine episodes. In her womb, the child Prahlad too absorbed this divine glory. This induced love for Vishnu in his heart.

Meanwhile Hiranyakashipu's evil rampaging worsened. When Prahlad was five he sent him to Shand and Amark, sons of his guru, Shukracharya. While being instructed, Prahlad listened mutely. However his mind remained engrossed in Vishnu. Once Hiranyakashipu took little Prahlad in his lap and asked him to recite something worthy from his studies.

Prahlad replied, "O Pitaji, everyone should forsake this miserable and dark well of samsara. They should then go off to the forest, do penance and offer worship to Shri Hari. to me, that is most worthy!"

Hearing these blasphemous words, Hiranyakashipu erupted in volcanic fury. He barked, "O Shand! Amark! How did this kid's intelligence become polluted? Has a Brahmin arrived in disguise to talk about Vishnu?" Both brothers trembled in fear. Begging forgiveness they brought him to their quarters and questioned him, "O little one, tell us how your intelligence turned negative."

With a smirk, Prahlad replied, "Negative intelligence is in believing in "I" and "mine." And this is known as animal intelligence. Just as iron is attracted by a magnet, my heart veers towards Paramatma..."

Speechless, the gurus threatened and scolded him. Then they began to instruct him about wealth and fulfilling material desires. However, not the least interested in this, Prahlad remained silent in class.

Shand and Amark interpreted this as Prahlad's acceptance and understanding of their instruction. Therefore they once took him along to Hiranyakashipu. The king of demons lovingly cradled his son in his arms and asked him, "O son, now tell me what have you learnt from the guru? Can you tell me an interesting story?"

Shravanam
Listening to His glory

Smaranam
recalling episodes of His lila

Vandanam
bowing to Him

Dasyam
worshipping Him by regarding oneself as das - servant

Sakhyam
worshipping Him as a friend

These words fuelled the fire of hatred in Hiranyakashipu. He reprimanded the gurus. They denied imparting knowledge of Vishnu to Prahlad. Therefore Hiranyakashipu turned to Prahlad, "Tell me right now who taught you false knowledge?"

Calmly Prahlad replied, "O Pitaji, the gurus are not at fault. They have obeyed you. How can one blind lead another blind? All misery and discord will only be eradicated when the dust of a true sadhu showers on our heads and our hearts merge with Shri Hari...."

Hearing this, the demon king pounced on his son. Manhandling him like a rag doll, he barked to his servants, "Take him! Kill him right now! He supports my enemy."

These words came as music to the demons. To kill him they inflicted a series of atrocities. First they jabbed him with spikes. Engrossed in Parmatma's meditation, Prahlad remained unhurt! This bewildered Hiranyakashipu, who then ordered other means of killing. However Paramatma delivered him from all of them.

First the demons used weapons, which disintegrated. When thrown under a wild elephant, the animal lifted Prahlad with his trunk and gently placed him on his back! Poisonous snakes turned as meek as a tortoise and raised their hoods over his head as if to shield him! A wild lion became as tame as a dog. Deadly poison mixed in his food became amrut. When dropped over a mountain cliff, invisible hands caught him. When tied to huge rocks to be sunk in the sea, the rocks floated like flowers!

Finally Hiranyakashipu ordered his sister Holika to sit in a fire with Prahlad in her lap. She possessed a miraculous fire-proof garment. However the garment vanished and she was incinerated, while Prahlad remained unscathed. His body had become indestructible like the jiva.

Shand and Amark then produced a demoness. However she killed them instead. Grieved by their deaths, Prahlad prayed to Vishnu and they were restored to life! Both then requested Hiranyakashipu to await arrival of his guru Shukracharya. The demon king agreed. Prahlad's education resumed.

Once while playing, Prahlad advised his classmates, "O friends! This human birth is invaluable. Its greatest endeavour is to attain Paramatma. Therefore one should conquer the indriyas (senses), forsake the craving for wealth and other mundane desires and become detached. The purpose of life is to realise Paramatma, the source of eternal bliss. Therefore forsake demon-ness and do good of all. Then Paramatma will be pleased with you."

Seeing Prahlad's unflinching devotion to Vishnu, the incensed demon king once questioned him,

"With what power do you disregard me?"

"The same power that supports you and that pervading creation."

"Where is he not? He is in myself, in you, in the sword, everything!"

"Is he in this pillar as well?"

Eyes burning with hatred, Hiranyakashipu stood up. Brandishing his sword he struck the pillar. Instantly, the pillar split and Paramatma Himself manifested in the form of Nrusinh, whose upper half was a lion and lower half, man. It was the evening of Vaishakh sud 14! A hideous battle ensued between deva and demon. Finally, Nrusinh, who was neither man nor beast, grabbed the demon like a toy and flung him on his lap. Nrusinh Bhagwan sat at the doorway - neither fully inside nor outside, nor wholly on earth nor in the air. It was neither day or night but twilight. With his claws, which were not weapons as such, he ripped the demon apart! In this manner Paramatma imbued moksha to the demon king.

Prahlad then humbly bowed at Shri Nrusinh's feet and received blessings. The demon prince then offered a unique prayer in which he requested moksha for his father, himself and deliverance from his indriyas and antahkaran.

Nrusinh Bhagwan consented and coroneted the child as king. After some time Prahlad handed over his reign to his son Virochan, engrossing himself in bhakti.

On this day, devotees observe upaavas or farar. In the evening they offer puja to Nrusinh Bhagwan, perform his arti, and pray to be able to offer unalloyed devotion like Prahlad.