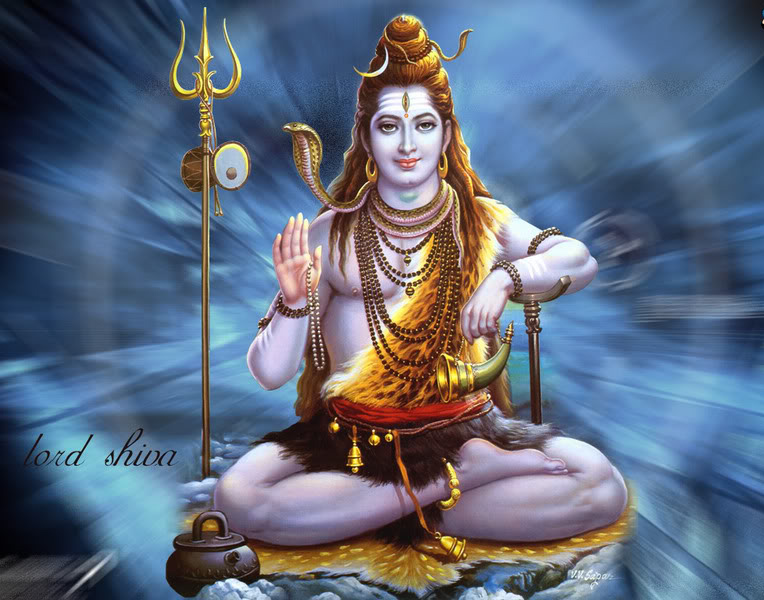 Shivaratri falls on the fourteenth day of dark half of every month but this day in Maha is The Great Night of Shiva and is dedicated to his worship. The origin of Shivaratri is attributed to several stories in Hindu mythology. One of the origins traces it back to the churning of the Ocean of milk by Devas (Gods) and Aasuras (demons) to obtain amrita (Nectar giving immortal life). Whilst churning the ocean many unusual items appeared from the ocean one of which included a deadly poison. As soon as they touched the poison, it exploded into poisonous fumes and threatened the entire universe. The frightened Devas ran to Brahma and Vishnu for assistance, but neither was able to help and sent them to Shiva. Due to Shiva's nature he agreed to help. He raised his Trident to condense the fumes and drank the poison but only to hold it in His throat. The Devas worshipped Lord Shiva for saving the universe. The poison left a dark blue mark on his neck and this is why he was called Neelkanth (blue-neck).

The above story relates to our everyday life in which we perform actions to obtain peace and happiness. In the process of achieving this we inevitably become overpowered by greed and selfishness, which ruins our efforts. Peace and happiness can be achieved by worshiping during the night when one is free from distraction of the physical world.

Another story that emphasizes the auspiciousness of Shivaratri is that of a Hunter being chased by a lion on this day. A hungry lion chased the hunter, who had killed many birds. The hunter ran and climbed up a Bilva tree. The lion roamed beneath waiting for its prey throughout the night. In order to stay awake and avoid falling off the tree, the hunter kept plucking the Bilva leaves and dropping them to the ground. The leaves fell on a Shivaling that happened to be at the bottom of the tree. Being one who is easily pleased Lord Shiva accepted this inadvertent offering and saved the hunter despite his sins of killing the birds.

Lord Shiva is the deity of death and destruction, without which growth and rebirth could not take place. Lord Shiva's third eye in the centre of His forehead opens only in extreme anger, whilst His matted hair carries the Goddess Ganga down to earth.

All Hindus observe Mahashivaratri. Devotees gather in great numbers and attend the temples of Shiva, perform pooja to the Shivaling, sing bajans, offer prayers and observe fasting. This worship continues late into the night when coconut, bilva leaves and other foods are offered to Lord Shiva and his divine consort Parvati.