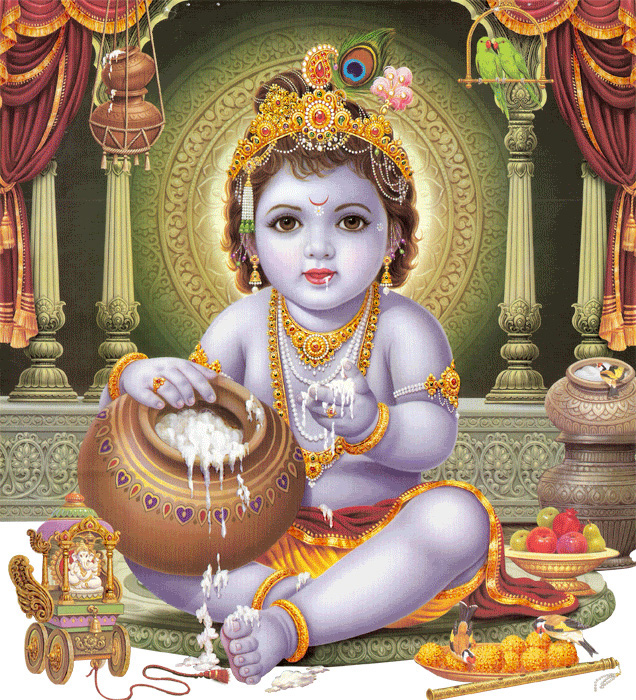 This is the birth of Lord Krishna, the eighth incarnation of Purna Purshottam. Lord Krishna took birth on this earth some 5000 yrs ago.

He was born to Devaki and Vasudev, in the dungeons of the Evil King Kansa's palace in Mathura. Kansa imprisoned both his sister Devaki, and Vasudev after a sage foretold Kansa that Devaki's eighth child will be responsible for his death. Kansa killed the first six children on their birth; the seventh child was transferred to the womb of Rohini, Vasudev's other wife. Lord Krishna, the eighth child was born on a dark rainy night. During the birth by the wish of Lord Krishna the guards had fallen asleep and all the locks were unlocked. Lord Krishna gave divine darshan to Devaki and Vasudev and instructed Vasudev to take the child to a town called Gokul to the house of Nandaraj and Yashoda. Vasudev left the dungeons and headed for Gokul crossing the River Yamuna. At Nandaraj's house a baby girl was born to the unconscious Yashoda, Nandraj took Lord Krishna and gave the baby girl to Vasudev to return to Mathura with. When Kansa heard that Devaki had given birth to their eighth child, He was about to kill the girl when she slipped out of his hands and in her divine form she tells Kansa that is fate is already born and safe.

This day is celebrated like that of Lord Swaminarayan's birth, Satsangi's would observe the rules of fasting and would attend the temple for darshan. The image of Lord Krishna would be placed in the decorated cradle, an offering of food would be made and then the entire congregation would perform Aarti. Songs of Krishna are sung loudly and joyfully accompanied with musical instruments, prashad of Panjorri is given and on the 6th day Lord Krishna is removed from the cradle prashad of Kuller is given.