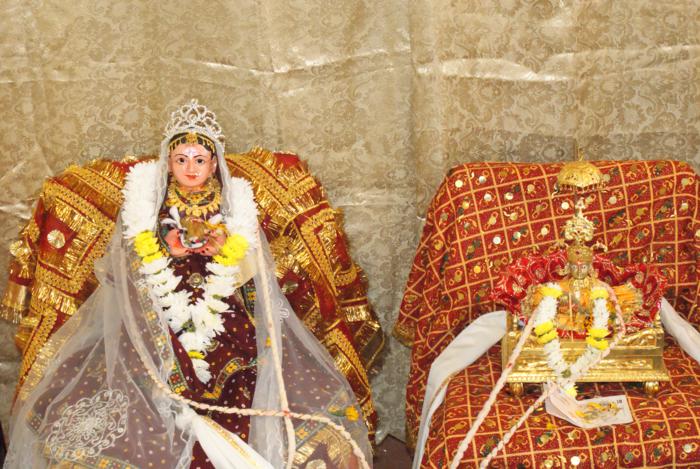 Once there was a king by the name of Kushdhavaj. He was a true devotee of God. He had two daughters who were devout Satsangi's, one by the name of Vrunda and another named Vedavanti. From a very young age, both had renounced the material world and were fully devoted to God. Vrunda and Vedavanti decided that they wanted God Himself to be their true husband and they would not marry anyone else. In order to please God, they both began to meditate and perform very difficult penance (Tapa). After a long period of penance, God was very pleased and appeared before them. God asked them to express their wishes so that He could fulfil them and also promised to eradicate all their pains and sufferings.

Vedavanti's wish was granted and she devoted her life in the service of God. However Tulsi, who was unaware of this, had been cursed by Lord Ganapati and became the wife of an asura. This asura was called Jalandhar and was the son of Sagar (the ocean).

Jalandhar was very strong and had exceptional magical and illusionary powers. Vrunda became very loyal to him and as she was very beautiful, Jalandhar gave her all the happiness that she deserved. Vrunda remained a devoted wife (Pativratta), undertook regular penance and followed the true path of Dharma (Righteousness). Her loyalty to Jalandhar was so strong that it became a powerful force, and he practically became unbeatable. He fought battles with Indra and other Devta's, defeating them all. Now Jalandhar decided that he would fight Lord Shiva and defeat Him as well. Jalandhar and Lord Shiva's army fought a long battle, with Jalandhar emerging victorious. Jalandhar's ego now knew no bounds. Lord Shiva was now very angry with Jalandhar and they engaged in a fierce battle. This battle was long and arduous and so fierce, that it cannot be described.

When Jalandhar realised he may be defeated, he used his illusionary powers to create an illusion which deluded / bewitched Lord Shiva. Jalandhar then took up the form of Lord Shiva and went to cheat Parvati. When he saw beautiful Parvati, he became very excited with passion. Parvati realised that this was not her husband and that Jalandhar would defile her so she became frightened and through Her powers, became invisible to Jalandhar. She then prayed to God who appeared before Her. Parvati asked God to save her from the evil clutches of this asura who had taken up the form of her husband Lord Shiva. God assured Parvati that He would protect Her and that He would find a way to defeat Jalandhar.

The only way Jalandhar could be defeated was to break the loyalty of his wife Vranda. God therefore set out to cheat Vrunda. He took the form of a man practicing penance (Sanyasi) and went in to the forest and started His meditation. As per Gods wish, Vrunda had a dream. In this dream she saw her husband Jalandhar in strange circumstances. She saw him naked and covered in oil, and riding a bull buffalo. He was wearing garlands made from black flowers and was surrounded by meat eating creatures and was travelling in a southerly direction. She also saw that her city was submerged in the ocean and that the sun appeared to have one hundred holes in it's body and was rising without any light. With such a frightening nightmare, she became very worried and thought that something very bad was about to happen. She was very frightened and began to cry. Vrunda became very restless and began to roam here and there, completely confused. She left her home, and with her two friends went into the garden and out into the forest. She was crying very loudly and calling for help. Then she saw two Rakshas (Demons) with faces of ferocious tigers and was extremely frightened, thinking that she would be eaten alive. She ran very fast and then saw a man meditating who was very calm and appeared to be full of compassion. Vrunda fell to his feet and asked to be saved from the demons. Bhagwan, who had taken up the form of this sanyasi, loudly grunted at the demons who disappeared into the forest.

Having been saved, Vrunda folded her hands together and offered her thanks to her saviour. She also prayed to him and asked if he could tell her if her husband Jalandhar who had gone to fight Lord Shiva, was dead or alive. She begged him to tell the truth. At that moment, two monkeys appeared, one carried Jalandhar's head, the other his body. When Vrunda saw that her husband had been killed, she fainted. At that moment, Bhagwan kindly sprinkled some water and she came around. Having regained her senses, she began to lament and prayed to Bhagwan to make her husband alive. She cried that she would be an orphan without her husband and that her life would not be worth living. She stated that she was a loyal wife and that she could not remain alive without her husband. "O Lord, you know all the desires that are in my heart, so please fulfil my wish and give me back my husband. My husband was more dear to me than my own soul, so please make him alive again". Bhagwan in the form of the Sanyasi laughed and said "Lord Shiva has killed your husband, however I will bring him back to life to express my kindness to you." As Bhagwan looked at the parts of Jalandhar's body, it appeared to stand up, upon which Bhagwan entered the dead body. Seeing Jalandhar alive, Vrunda became very happy and embraced him, thinking it was truly her dear husband.

Bhagwan in the form of Jalandhar and Vrunda spent some time together. Bhagwan cheated Vrunda and her Pativratta was broken. As Jalandhar's protection was now lost, he was easily killed by Lord Shiva. Unknowingly Vrunda was enjoying her life with Bhagwan, but one day she did appear to realise that this was not actually her husband, but Bhagwan himself in the form of Jalandhar. She became extremely angry and told Bhagwan that He had carried out an indispicable deed that was totally unworthy of him. She told Bhagwan that He was the defender of Dharma and that it was His duty to ensure that everyone stayed within that Dharma, but how was it that instead of defending her Dharma, He had cheated and betrayed her through deceit. Vrunda stated that she had extraordinary powers and if had been any other mortal she would have burned him to death, but she could do nothing, as you are Bhagwan Himself. However she cursed Bhagwan to become a stone that will be worshipped all over the universe. In turn Bhagwan also cursed Vrunda to become a Tulsi Plant. Hence Vrunda became known as Tulsi.

Bhagwan then blessed Vrunda and declared that she and He will always remain together as he liked her very much. Bhagwan said, "I will not accept any offerings in Yagna's and Pooja's without your presence. All men and women, Deva's and Asura's will not do my pooja without Tulsi Leaves." Bhagwan gave this boon to Vrunda, which she accepted and she also accepted the curse to become a Tulsi Plant. Bhagwan became Shaligram (Stone) and Vrunda became a Tulsi plant. They both married and became a devoted couple destined to stay together forever.

To celebrate this eternal union, we re-enact the wedding of Tulsi and Shaligram, who of course is god himself. This marriage takes place on any of the days from Devprabhodni Ekadashi to Poonam (15th day). In our Cardiff temple a Sunday is normally chosen. Two families take the opportunity to adopt Lord Vishnu and Tulsibai and perform the marriage rites. The wedding ceremony is as grand as any other marriage. A Brahmin, in the presence of all the Satsangi's, conducts the ceremony, prashad is offered and matrimonial songs are sung with musical instruments.