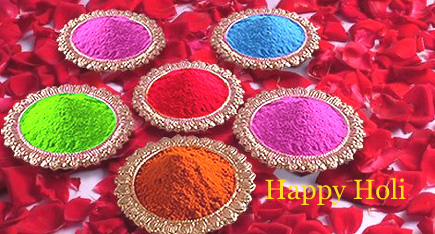 There are several stories related to this day but the most renowned is that of Prahlad and his unbroken devotion for Narayan. Prahlad's father Hiranyakashipu, a demon king regarded Lord Vishnu as his enemy. Hiranyakashipu tormented Prahlad in attempt to stop him from worshipping Lord Vishnu. Prahlad would show no retaliation but simply chant Lord Vishnu's name knowing that Lord Vishnu would protect him. Realising the strength of Prahlad's devotion and that he could not stop Prahlad's worshipping, Hiranyakashipu decided to burn Prahlad. He ordered his Evil demon sister Holika to wear her magical chundari that would protect her from fire when worn over her head. Holika took Prahlad on her lap and sat on the pyre. As the pyre was set alight a gust of wind blew Holika's Chundari off her head and on to Prahlad. Holika was burnt alive and the magical Chundari protected Prahlad.

To mark this day Hindus burn the effigies of Holika.

Holi also marks the arrival of spring. Hindus celebrate this by offering their newly harvested grain to Bhagwan and by spraying and throwing coloured water on each other symbolizing the beauty and colour associated with spring.